Over the Summer WFL Nation and Uni Watch started a contest for readers to create updated uniforms of what they think the league would look like today if the WFL was still around 40 years later.  Images will be posted on both Uni Watch as well as WFL Nation.
We left the rules fairly open-ended... and some readers went one step further!  They created uniforms for each decade!

Next up is Bryan Phillips who went with the Southern California Sun.

For the WFL design contest, I chose to do an extensive uniform timeline of my local team, Southern California Sun.
So here is the basic summary of each time period: 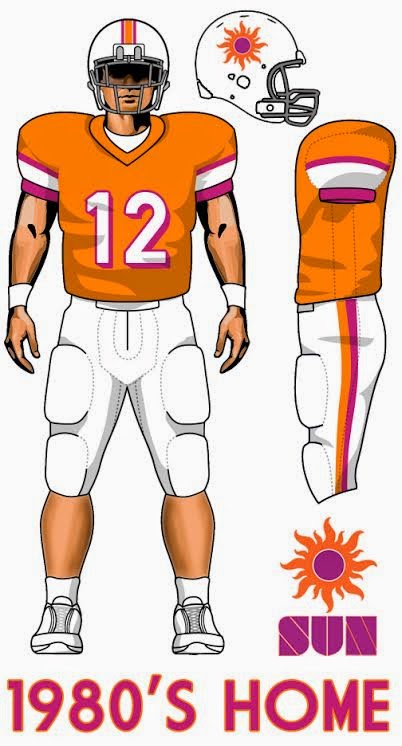 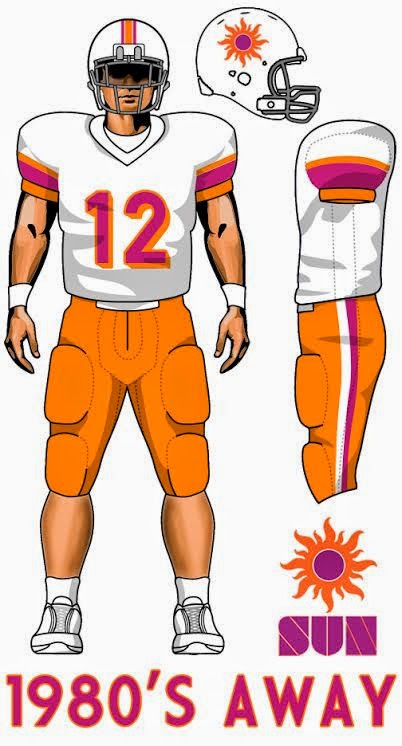 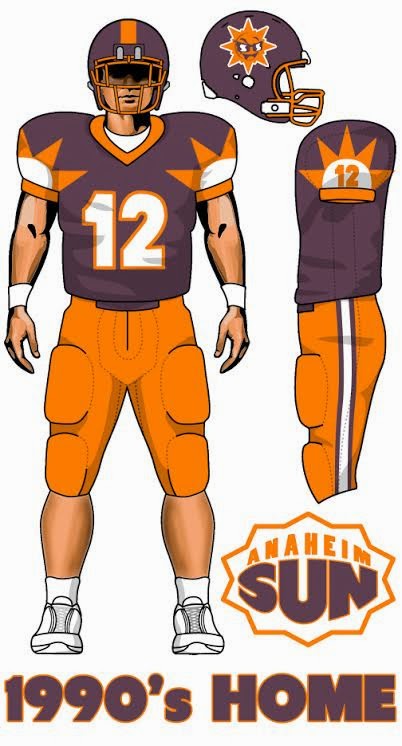 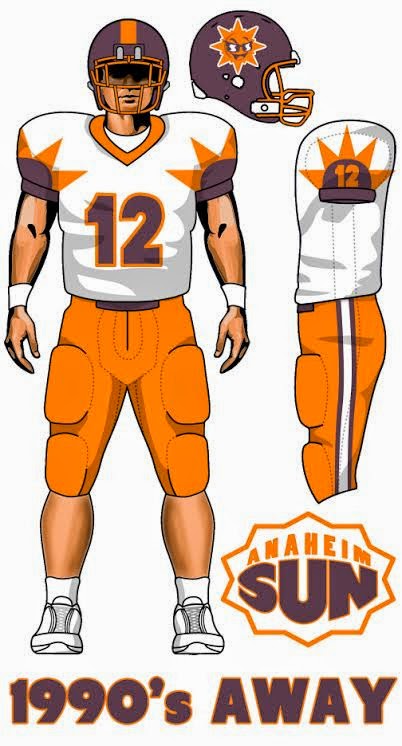 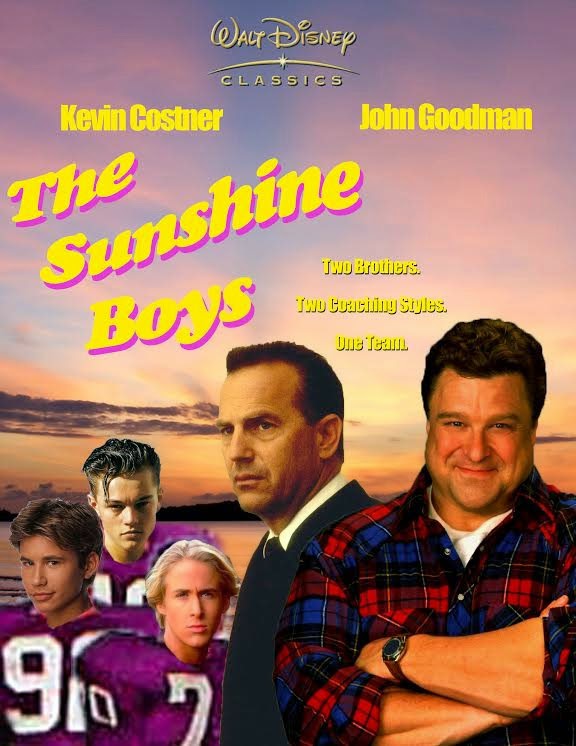 1990s: The Walt Disney Company not only introduces the Mighty Ducks and purchases the Angels, but they acquire their own football team by purchasing the Sun. They change the location name to Anaheim and the Magenta to Eggplant (like all the other hip 90s teams). The logo changes into a cartoon sun created by a Disney animator and the wordmark becomes something “bold and fun”. ALSO, they get their very own Disney original film starring John Goodman and Kevin Costner as two brothers with opposite coaching styles that need to learn to work together in order to bring home an unlikely championship. Along the way they learn the importance of family and the power of teamwork. 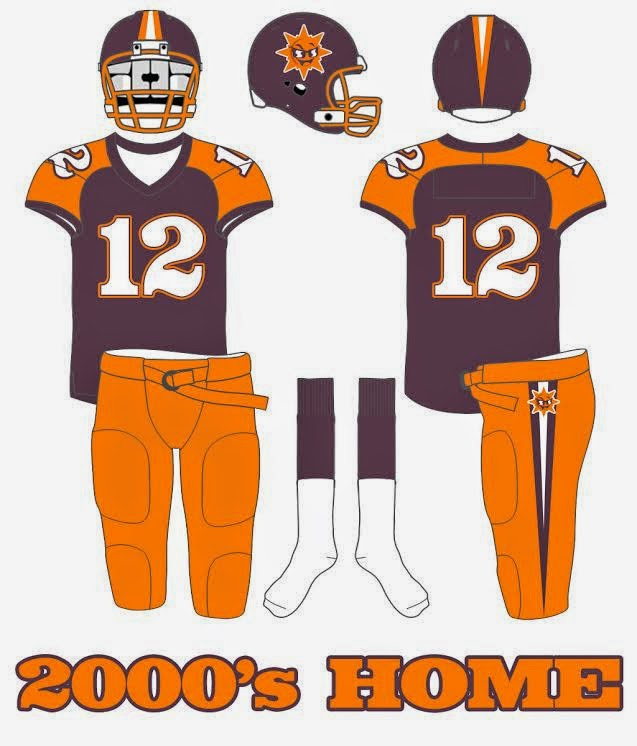 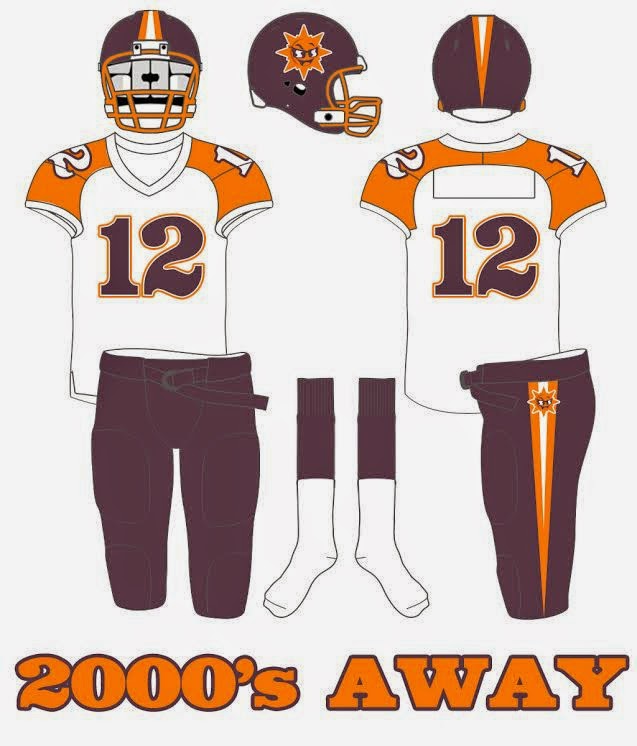 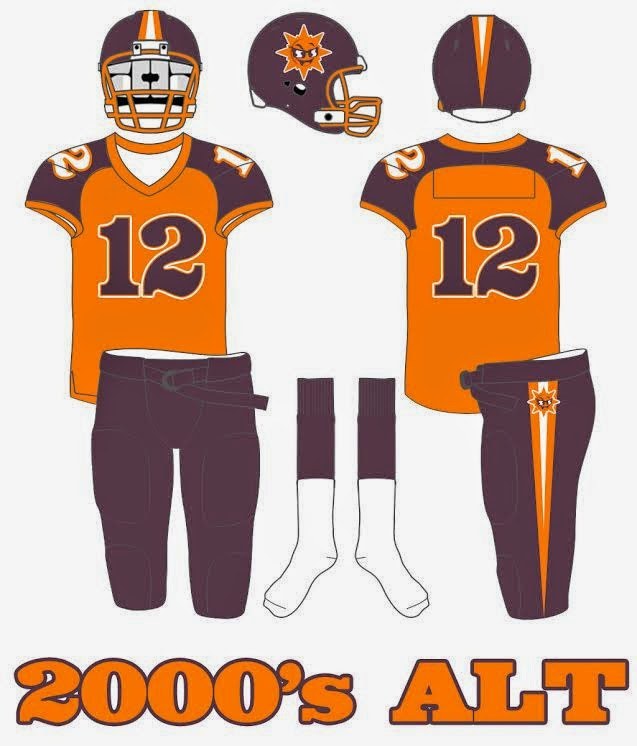 2000s: Disney sells ownership of the team over with the rest of their sport franchises. Team stays in Anaheim. They keep the same colors and logos but change the uniforms. The uniforms involve shoulder yokes, strange pant striping, and different numeral font choice. 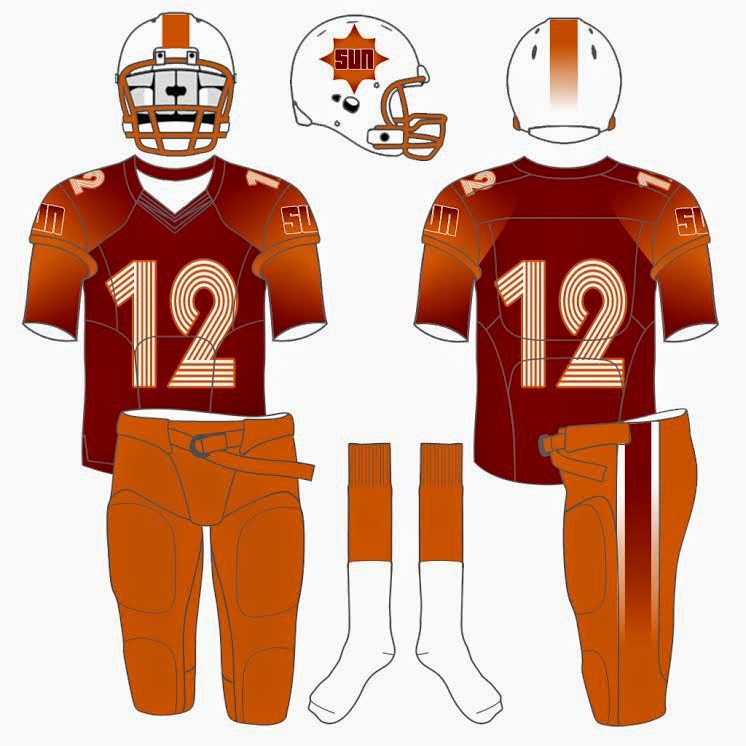 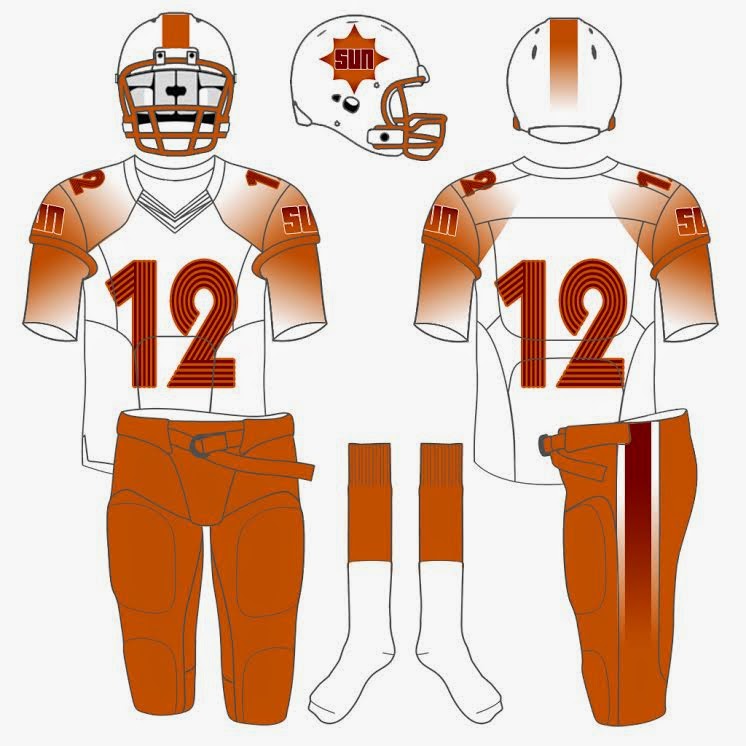 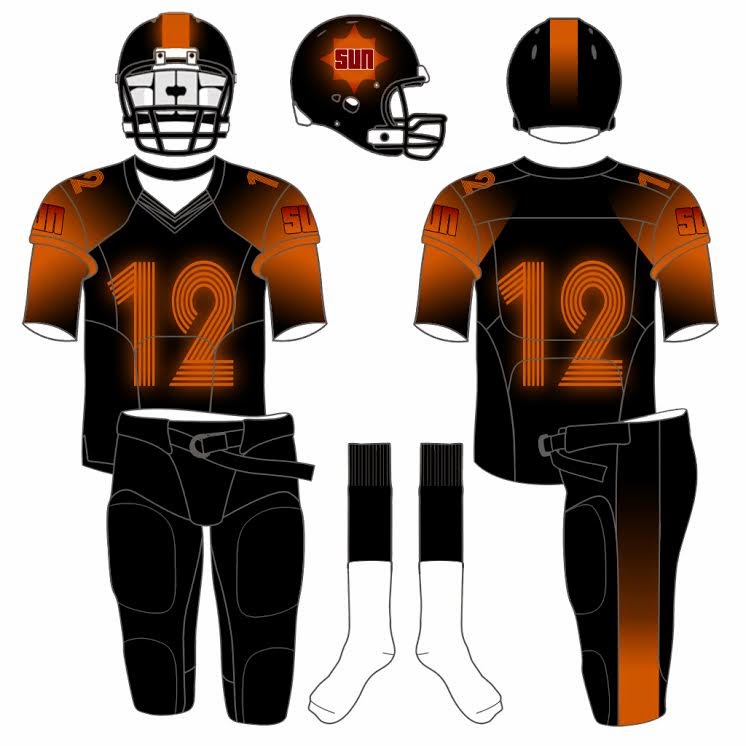 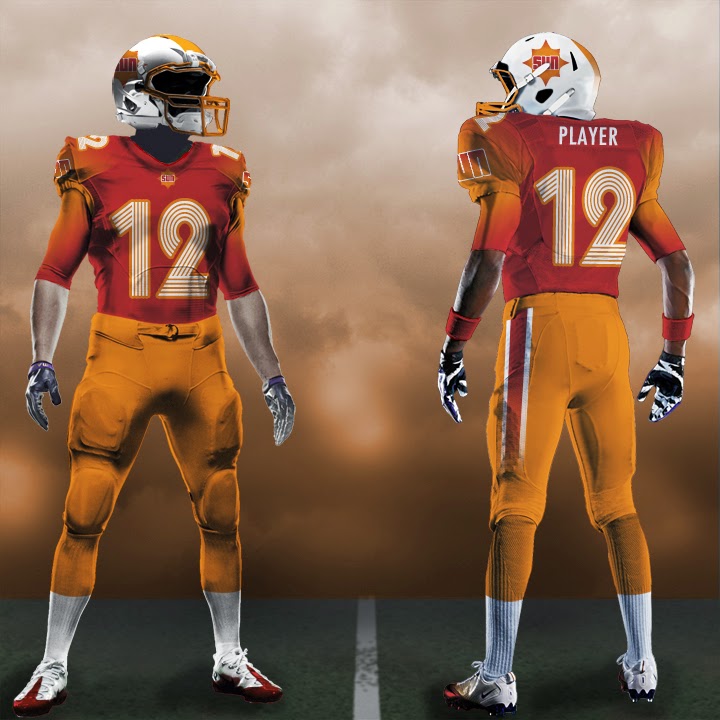 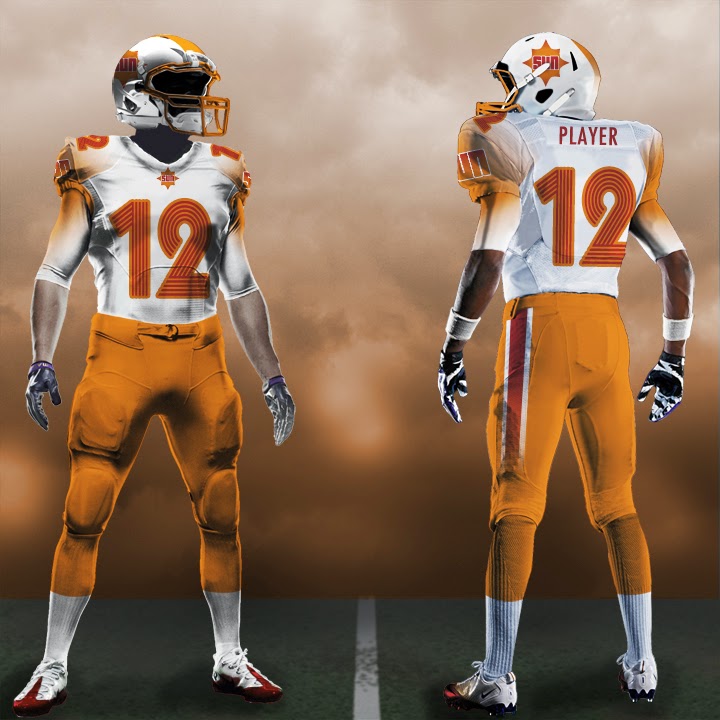 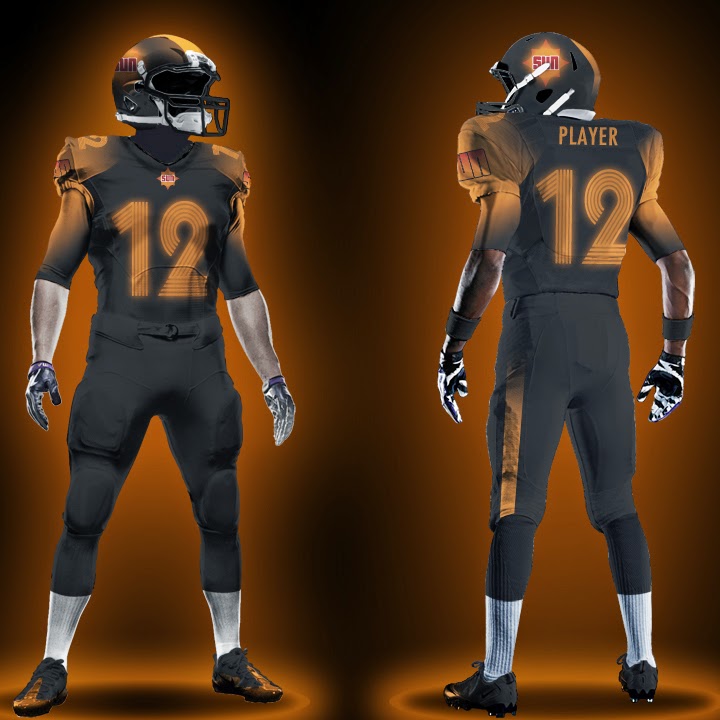 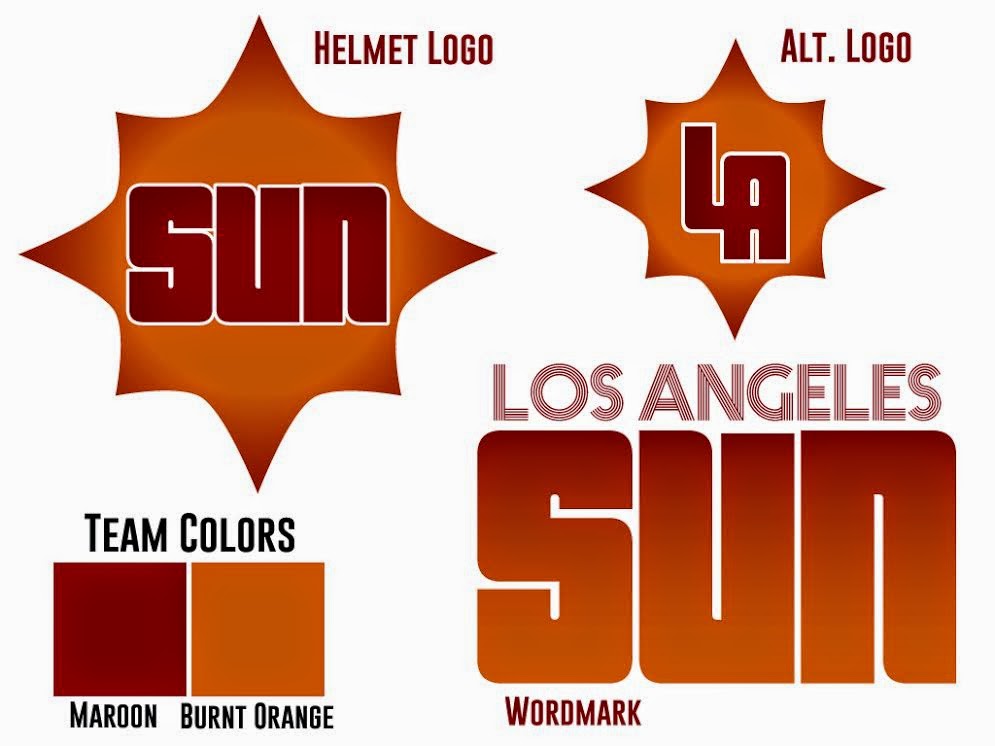 Current: After many years of being without a football team, Los Angeles finally has their wish come true! The Sun change ownership again and are relocated to Los Angeles to play at any of the many proposed football stadiums (probably Farmers Field next to Staples Center). They become the Los Angeles Sun and go through a complete overhaul. New colors (Maroon and Burnt Orange). New logo (inspired by the original look) and most notably a new uniform. The uniform relies heavily on what they would call a Sunburst Gradient on the shoulders and pant striping. They would also introduce an all black uniform titled “Midnight Solar Flare”. The All-Black alternate would be covered in glowing reflective material on the orange numerals, shoulder gradients, and pant striping that would light up under the stadium lights for night games.

As you can see I wasn’t necessarily going for the most pleasing uniform aesthetic, but the most realistic uniform history for an originally bright team in a league that fell apart after two seasons.